What Toronto is saying about the King Street Pilot

In mid-November, the City of Toronto launched a new pilot project aimed at improving commute times on King Street. With it came immediate praise and criticism as diverse as the city itself from councilors and business owners to TTC commuters and drivers.

As Toronto continues to evolve and experience massive growth, it was undeniable some sort of action was necessary for King Street. The 504 King Street, which runs between Dundas West Station and Broadview Station, is the busiest streetcar route in the city, servicing an average of 65,000 people per day. The traffic-caused delays and exaggerated wait times for streetcar riders was resulting in horror stories, like riders walking an hour to work and still arriving before the streetcar, or having to take taxis or Ubers daily because they simply couldn’t squeeze onto any form of transit. The issue could not continue and we have to admire any strong efforts to improve our city, particularly for transit users and pedestrians commuting within downtown, who have suffered for some time.

Now well into the Pilot, we took to Twitter to find out how the King Street Pilot is being received by Torontonians on the front lines, and their suggestions for both embracing the changes and possible improvements to the project. The comments were insightful and gave us a glimpse of how the day to day of the #KingStreetPilot is really playing out.

Earlier this month, the latest data from the King Street Pilot was released showing that streetcar ridership is up 25 per cent since it began.

This indicates a fairly successful first two months, but also poses its own issues. With ridership already at the largest of any streetcar route, this increase is causing longer wait times and overcrowding during peak periods, much to rider’s dismay.

What business owners have to say

A key voice speaking out against the pilot are business owners on King Street. There have been many concerns about the impact to business with limits to accessibility for drivers. It is important to note however, that with the temperature breaking -20 a few times in the last few weeks, we may need to wait until the warmer months to see the true impact for street-oriented business. In response to concern from local entrepreneurs, the city is attempting to adjust the problem by offering free parking around King Street. This move has been met with criticism as well, with many riders claiming that making life easier for drivers takes away from the pilot’s underlying intention; to get people out of their cars and into transit.

There’s also some anger from riders about subsidized parking without corresponding transit subsidizes.

Furthermore, the dialogue between business owners and transit users has become more heated. There have been a lot of back and forth from transit riders who claim that faster streetcar times and reliable transit have made visiting businesses along King easier, not harder. In fact, it seems that the refusal to give the pilot project a chance from businesses has left a lot of transit users feeling underappreciated, claiming that businesses could do more to work with the changes instead of simply complaining on behalf of their car-oriented patrons.

The trials and triumphs of the project aside, pilot projects such as these are just that – a pilot. They give the city a chance to try a solution and assess the impacts, benefits and unforeseen consequences and make adjustments as necessary. The year deadline means the pilot project in its current state won’t be around forever. It may be eliminated, altered or improved when the time comes.

It’s also important to remember the intent of efforts such as these. Although the project may have a negative impact for some, it doesn’t mean it hasn’t achieved its objectives. Dialogues such as the one below are a great example of why pilots are an important tool in determining a city’s future. 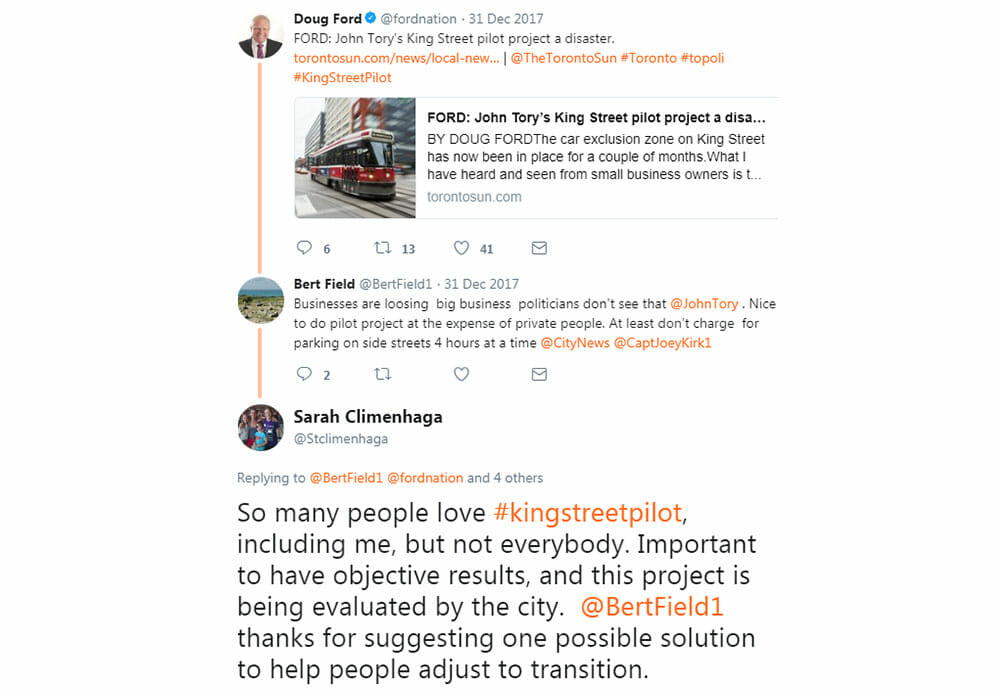 Everyone is King Design Build Competition

In the meantime, one thing is for sure, the slowed traffic and turning restrictions has led to areas of dead space on King. As a result, the city has launched the Everyone is King Design Build Competition, intended to create a series of attractive curb lane public spaces on King Street for all to enjoy. Find out more here. 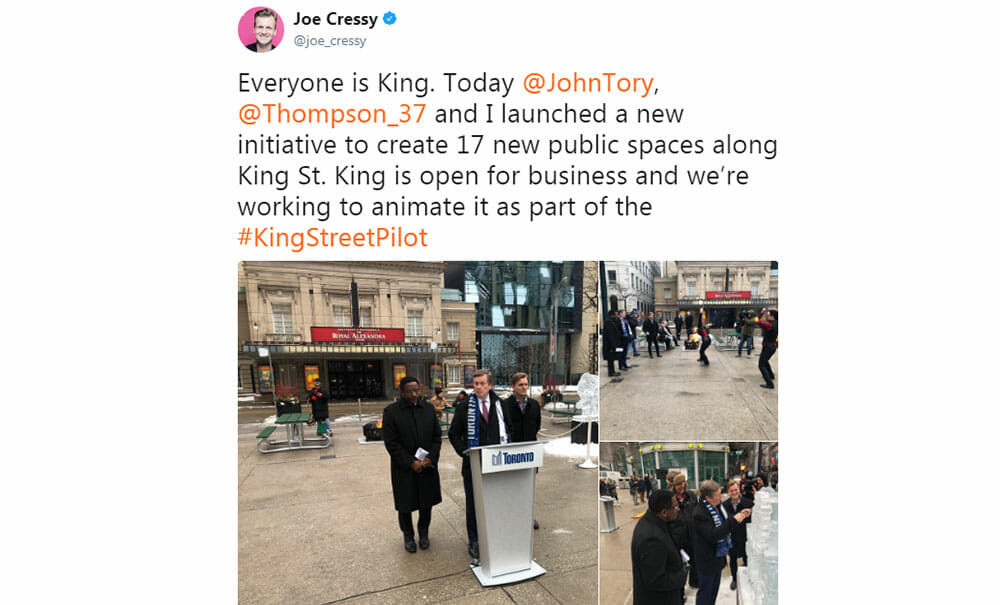 What has your experience with the King Street pilot been? Let us know via Twitter, Instagram or Facebook if you love it, hate it or how you’d improve the pilot.