Everything You Need To Know About The Sidewalk Toronto Project

Sidewalk Labs, the branch of Alphabet Inc. focused on cities and urban development, announced their Master Innovation and Development Plan (MIDP)  for their Sidewalk Toronto project earlier this month. And while there’s been plenty of buzz surrounding the project, the MIDP is the first official pitch document that sets out the company’s vision for the area. We break down what you need to know below.

Sidewalk Labs’ Sidewalk Toronto project aims to shape Toronto’s future and set a new standard for urban life by integrating innovations into the physical development of cities. Dubbed “the most innovative district in the world” by Sidewalk Labs CEO Dan Doctoroff, the company predicts that the project will create an extraordinary number of jobs and economic benefits for Torontonians while also achieving new levels of environmental sustainability, pioneering a 21st-century mobility network and producing a record number of affordable housing.

WHERE WILL IT BE LOCATED?

The Sidewalk Toronto project will be developed on Toronto’s eastern waterfront, with Alphabet Inc. having proposed two smart neighbourhoods in the side: Quayside and Villiers West. These neighbourhoods will exist inside a broader area called the Innovative Development and Economic Acceleration (IDEA) district. The transformation of Quayside will constitute the first part of the project, with a proposed 4,200 residents once complete. Following Quayside, Sidewalk Labs is proposing a partial redevelopment of Villiers Island that would be home to a 1.5-million-square-foot innovation campus that would become headquarters for Google. 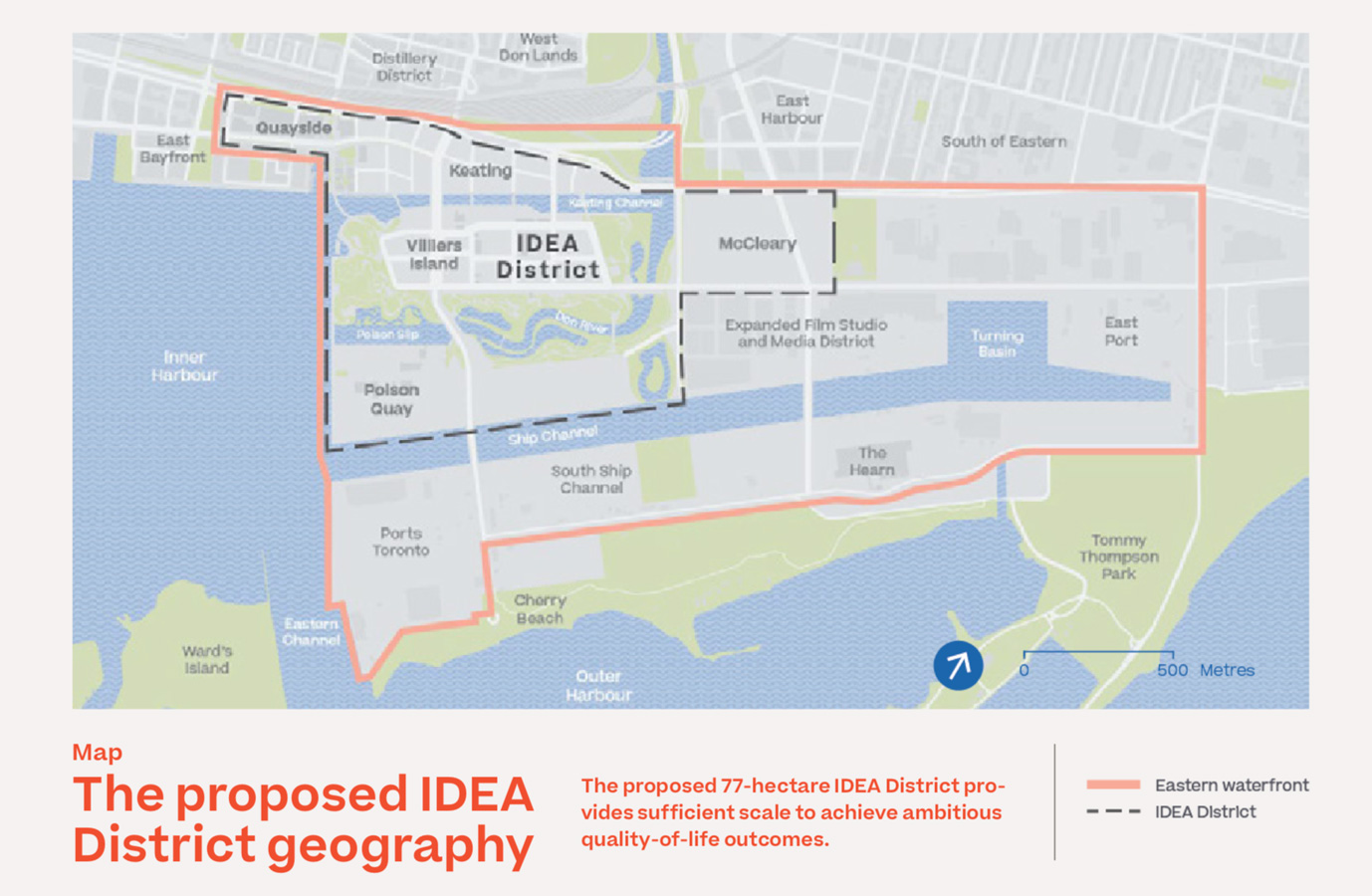 Sidewalk Toronto will be a high-tech community that revitalizes what is currently a mostly vacant 12-acre patch of industrial waterfront. The first phase of development will include two mixed-use development buildings that will include residential units in addition to office and retail spaces, as well as three major outdoor public spaces, which the company has dubbed Parliament Plaza, Parliament Slip and Silo Field. To ensure that these spaces are usable during less temperate months, Sidewalk Labs has also unveiled plans for building raincoats and fanshells — awnings that will protect sidewalks from the elements — as well as a modular heated pavement system with the capability to melt snow and absorb stormwater. The pavement system will also be able to change the use of a street throughout the day and direct traffic with LED lights.

The modular pavement system is designed to reduce car use and promote cycling and walking, while a proposed expansion to the city’s light-rail system will further lessen dependency on cars. There will also be public Wi-Fi installations in addition to other sensors, that will work to collect “urban data” to better inform housing and traffic decisions.

WHEN WILL IT BE IMPLEMENTED?

After a year and a half of project planning, the Sidewalk Toronto project will be voted on by the Toronto City Council in late 2019 and early 2020. Should it pass, Sidewalk Labs hopes to begin construction on the Quayside phase of the project before 2021, with a total expected completion date of 2040.

WHY IS IT CAUSING SUCH A STIR?

Alphabet Inc. is a sister company of Google — the latter of which earned its own status as an IT giant by monopolizing user data. This, coupled with the fact that Sidewalk Labs has offered minimal information about how the data gathered at Quayside would be owned and used more than a year after its original agreement, has privacy advocates concerned about the lack of transparency and whether or not the data collected could and would be sold.

Sidewalk Labs has tried to quell the backlash, saying that the data collected would be done so transparently, stored openly whenever possible and put to a “beneficial purpose” that includes streamlining inefficiencies in transportation, housing and energy use. However, it has neglected to address how the user data collected would be protected.

A VISION FOR UNLOCKING THE EASTERN WATERFRONT

There’s a lot to be said about the positive impact the Sidewalk Toronto project will have on the city. The project has the potential to become the largest climate-positive community in North America, reducing greenhouse gasses by 89% and enabling an ecosystem where urban innovations can flourish. Additionally, the project is set to bolster Toronto’s economy with the creation of a projected 44,000 jobs and $14.2 billion in annual economic impact by 2040.

The outstanding advances that will be explored in the Sidewalk Toronto project and the transformation of Toronto’s eastern waterfront are just some of the reasons why Empire has chosen to build in this desirable up-and-coming innovation hub. Register for more details on our project at 162 Queens Quay.