Then & Now: The Evolution of Old Fourth Ward & West Midtown

How does a neighborhood steeped in history find its stride? When heritage and new ideas merge, a thriving, diverse community is born.

This couldn’t be truer or more visible than in Old Fourth Ward. Local Atlantans have known Old Fourth Ward, (or O4W), as one of the most popular neighborhoods in the city for some time now. With an abundance of nightlife, and easy access to the BeltLine and iconic Ponce City Market, it has become a hallmark of hipness. It’s now one of the most desirable neighborhoods to live and work in, but what was the O4W of decades past?

And then there’s West Midtown. Once an industrial mecca, West Midtown has transformed into the go-to spot for young professionals and design enthusiasts. It’s home to a niche group of contemporary art galleries and centers, including The Goat Farm Arts Center, and is also home to the beloved Westside Provisions District that has become the heart of the neighborhood. But how did it come to be this way?

Strengthening the connection between people and the places they share is the ultimate goal in true placemaking. Inevitably, the rich layers of history, people and events lend to the authenticity of place, and some of the world’s most beloved neighborhoods are such because of their ability to celebrate the history of those who came before. 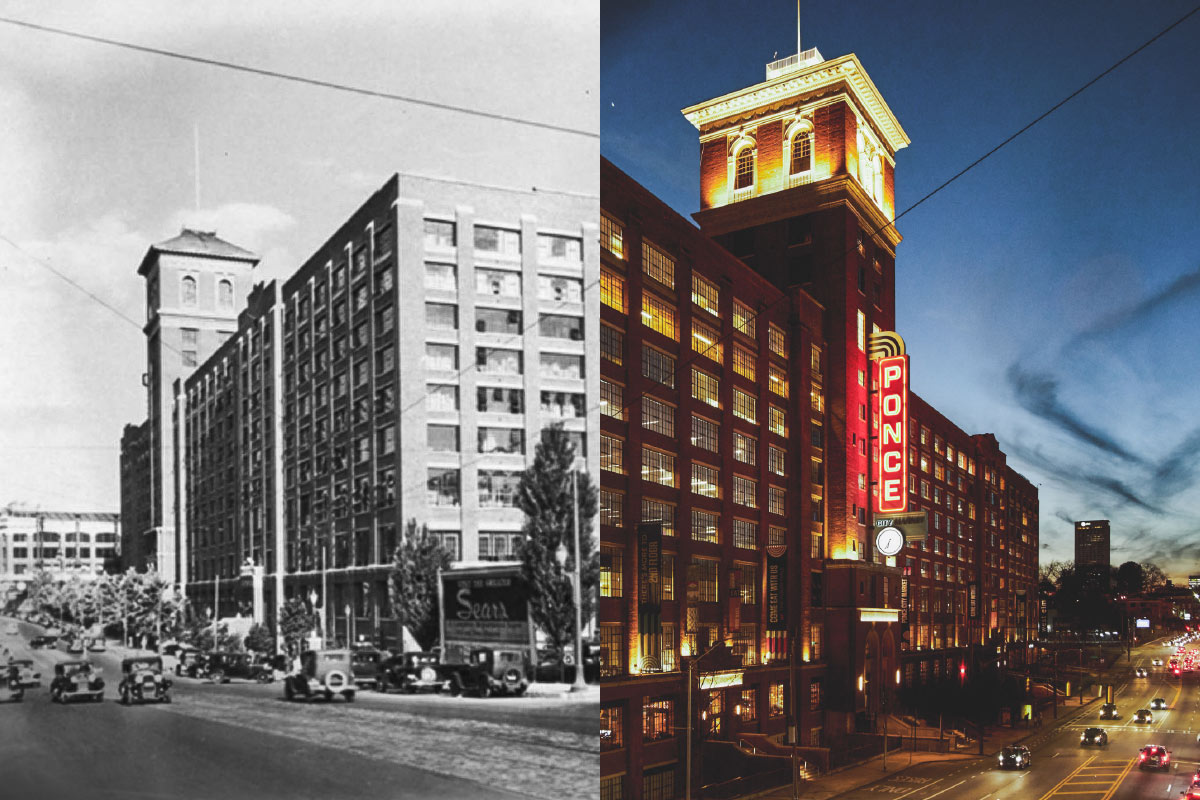 The Legacy of a Neighborhood

Atlanta’s Old Fourth Ward has flowed in and out of economic prosperity with its original mix of German, Jewish and African-American residents representing the working-class population of the city. The Great Atlanta fire of 1917 ravaged the neighborhood, destroying almost 80 per cent of the area and leaving almost 10,000 people homeless. Redevelopment was slow with elaborate Victorians replaced by more modest brick apartments and mixed income housing, changing the urban fabric of Old Fourth Ward.

The aftermath saw the integration of old and the new, helping to create a foundation for growth that evolved into a booming neighborhood by the time Martin Luther King Jr. — the area’s most famous resident — was born in 1929. Today, hundreds of thousands flock to 501 Auburn Ave. annually to see his birth home.

As with most of Intown Atlanta, the neighborhood declined in the 1960s as the suburban sprawl saw people moving further out from the core. A new wave of redevelopment began to happen after the Olympics as more neighborhoods close to downtown saw an influx from Atlantans looking to trade in long hours sitting in traffic. A leading example of Intown renewal, Old Fourth Ward was on its way up again in the first decade of the 2000s — most notably along the BeltLine, Ponce de Leon Avenue, North Avenue and Highland Avenue. The double-edged sword has been challenging, however, for potential homebuyers trying to get in the market, as such drastic change typically coincides with increasing housing prices. With one of Empire’s newest Intown sites, Empire 4Forty4, offering a smaller footprint and innovative design at an introductory price point, we recognize the need to keep prices attainable.

The urban renaissance is not hard to see: vacant historic buildings like The Studioplex are being repurposed and century homes are being preserved in addition to new apartments, homes and condos popping up. A burgeoning artistic community with plenty of vibrant street art has arrived, and so has the emergence of dozens of new shops and restaurants as this neighborhood has become a favorite of people from diverse backgrounds.

On Sundays you will see people walking into one of the many historic Old Fourth Ward churches. You will see young professionals rollerblading through Freedom Park and families biking along Ponce de Leon Avenue. Events like the Old Fourth Ward Park Arts Festival, Sweet Auburn Historic District’s Springfest and the National Black Arts Festival help you experience a feeling of community with a good dose of heritage and culture.

In 2012, a couple years before the redevelopment of the PCM site, a new kind of community amenity was born as the BeltLine, a 33-mile multi-use urban trail, connecting Atlanta’s Intown. Old Fourth Ward soon became one of the most popular stops on the trail, supporting the pop-up of local mom and pops catering to Millennial and Boomer customers alike. As the artery that pulls the neighborhood together, there truly is something for everyone. Here you can find the best green juice, yoga studio, small craft brew, niche artisan or latest food trend all on a short walk.

Atlanta’s Westside has always been a prime location, but was long overlooked. Once largely the city’s industrial haven in the late 1880s, the area’s top attractions were slaughterhouses, factories and warehouses. It was the side of town most often referred to by its streets — including Chattahoochee, Marietta and Huff — rather than a specific name. In fact, the idea of “West Midtown” or “Westside” as it’s now often referred to is something that’s grown over time as the neighborhood continues to reinvent itself.

The mix of nightlife and creative types moving into the area started in the late 1990s and early 2000s, but didn’t quite take off until the mid 2010s when West Midtown slowly began to show signs of a blossoming trend factor. Today, the Westside has capitalized on its history by reworking those industrial structures into adaptive reuse projects that have become destinations for foodies, shoppers, arts enthusiasts, residents and businesses alike.

Anyone coming into the area will immediately notice Westside Provisions on Howell Mill Rd which was once the White Provisions Company building erected by William White Jr. in 1910. A former meatpacking plant, WSPD is now touted as one of the core’s hippest destinations to eat, shop and socialize, as well as the home of some of the city’s best contemporary art galleries.

West Midtown is also a neighborhood of arts centers — the Goat Farm Arts Center, Westside Cultural Arts Center, Atlanta Contemporary Art Center and King Plow Arts Center — each with their own niche and flare. The Goat Farm Arts Center, originally one of the state’s largest manufacturing centers, produced cotton gins and other cast-iron items in its heyday in 15 buildings encircled by three rail lines. Throughout World War II production shifted to ammunition and mortars. The ruins of the plant now make up part of the artists’ enclave known as the Goat Farm.

We would be remiss not to mention the expanding outdoor options that have come to West Midtown in recent years. Starting with the BeltLine’s Westside trail, plans are in the works for Westside Park at Bellwood Quarry that will see a 280-acre park and 2 billion-gallon reservoir come to life as the city’s largest green space and another turning point in the neighborhood’s history.

These new community amenities coupled with sophisticated nods to the past have piqued the interest of young professionals and empty nesters looking to settle down in a connected and authentic neighborhood that can truly offer an urban lifestyle. Empire is excited to become part of the neighborhood with our Crosby community, offering new home buying options for Atlantans who desire to live, work and play without the commute. From the view up here on the Westside, the future looks bright for this neighborhood.

Build a Custom Home with Empire in North Carolina

3 Reasons to Invest in West Charlotte